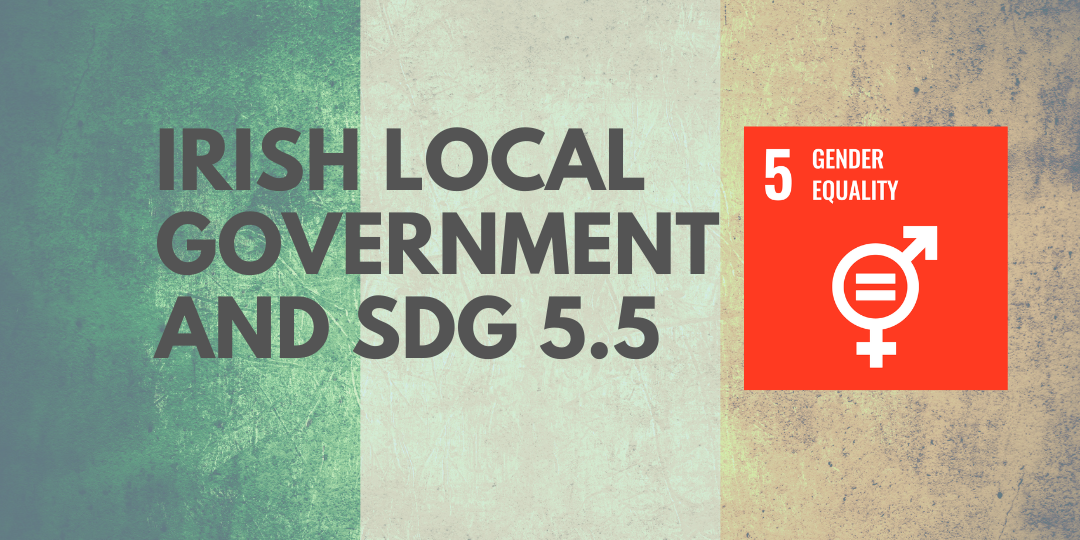 Is your local government acting on Ireland’s national ambitions to achieve SDG 5.5?

Firstly, the status of relevant SDG 5 indicators are explored. Then the make-up of the three key groups of local government decision makers is considered. Finally, we explore how these decision makers are acting to progress SDG 5.

In Ireland the primary responsibilities of local government are: Housing, Planning, Arts, Heritage & Archives, Roads & Transport, Environment, Water & Waste Water, Community, and Libraries. Firstly we explore the three groups directly involved in local government decision making. Jump to the groups that most interested you here ↓ Each section includes thoughts on ‘action’ that group can take to move towards gender equality.

Together these three groups make up your “LCDC”, Local Community Development Committee. The national guidance states that “every effort should be made to ensure an equitable gender balance” amongst members. Additionally each local government is tasked with seeking direct community input as they develop plans. Finally there are actions that individuals (that’s you!) can take to move Ireland’s local government towards gender equality.

SDG indicator 5.5.1 – Seats held by women in […] local Government, addressing gender imbalance in leadership positions in local government, is the first SDG 5.5 indicator. The map below, by Geohive.ie, shows that Ireland has yet to meet indicator 5.5.1. Most of the country is a paler blue indicating that women make up 25% or less of Ireland’s 949 local councilors, albeit an improvement from 1970 and 1980 when women made up less than 10%.

Progress in this regards rests both with the political parties, individuals who stand for local election, supporters and the voting public.

Our 31 city and county councils, made up of both elected councilors (as above) and civil servants from local and state agencies, work in cooperation with civic society through Public Participant Networks (PPNs) and others. In 2019, these 31 local government authorities employed almost 28,000 people and had a budget of ~€5 billion.

In 2019, the public service (OPS 2020) selected “priority actions for implementation” including action 16 which states “promote equality, diversity and inclusion.” By Sept 2020 action 16 has produced two “resource documents”, a vision and maturity model for equality diversity and inclusion. There are other actions on-going to improve gender balance in the civil service. Local indicators that rolled up to the national indicator would be welcome.

Public Participation Networks, or PPNs, represent three sections of society; environmental, social inclusion and voluntary organisations. PPN participants must be 1). with a registered charity and 2). aim to include the local community in decision making. ‘Linkage groups‘ aim to bring together PPN participants with similar interests. For example Fingal’s PPN Linkage groups in 2018 were themed around the SDGs. SDG 5 is not covered. Gender balance in PPNs would be a welcome improvement.

As a new, and welcome, addition to the local government in Ireland, PPNs continue to develop and a gender balance indicator would creating some transparency and awareness into who is influencing and deciding upon local government plans.

Having looked at the three core groups of people involved in local government decision making, we now turn to how they work via committees and plans, and the potential for put from communities into that work.

Community input is outlined as “necessary” for the LCDC. This input may be solicited directly from the public through focus groups, surveys and other requests for input. The input of “community development bodies, farming/agriculture interests, business/employer interests, trade union interests, and other relevant local and community interests” are also considered (for more see the REVISED GUIDELINES FOR THE OPERATION OF LOCAL COMMUNITY DEVELOPMENT COMMITTEES). The National Women’s Council of Ireland drew up a LCDC consultation checklist.

Dublin City Council runs the first local government-led online opinion panel “Your Dublin, Your Voice” which had 1,110 respondents in May 2020 for which respondents were gender balanced – hurrah!!!

Each Local Authority has Strategic Policy Committees (SPCs) to “broaden involvement in local government through the participation of sectoral and community interests”. These are the committees where your elected councilors participate. SPCs formulate, evaluate and report on policy. The number and topics of SPCs varies across the country. In 2020 Fingal had 6 SPCs whereas Dublin City Council had 7 . On your local authority website you will find minutes of previous SPC meeting. Here’s an example from Tipperary SPCs.

However, deciding on policies remains the role of the LCDC.

There are multiple interconnected planning approaches for local government. Following guidance from the Minister for Local Government in 2015, each of the 31 councils was tasked with developing an overarching Local Economic and Community Plan (LECPs), such as Fingal’s 2015 -2021 LECP and Wicklow’s 2016-2022 LECP. These LECPs indicate what should be done locally, incorporating community input (as above). LCDCs (elected councilors, civil servants and PPN reps) oversea these plans.

The LECPs are enacted by civil servants in the 31 local authorities in cooperation with national and local agencies. For example in the area of business and entrepreneurship, Enterprise Ireland, a national agency, works with local enterprise offices (LEOs) in each of the local authorities. Further, existing local agencies vary widely. For example rural communities receive €250 million in EU resources to engage with and direct local development via a programme called LEADER.

Various other plans are located within this LECP.

Another example of the various plans which sit within the overall LECP framework are corporate plans. Dublin City Council has a bi-annual Dublin City Council Corporate Plan 2020 – 2024 which outline the approach “to deliver on the key priorities ….. and to respond to the defining global and local environmental, social and economic challenges”.

Similar to the SDGs, these LECPs use a cascading structure from ‘themes’ to ‘actions’. There are no indicators so in 2020 the critical measure of, not action but, impact is missing. The Guidelines on Local Economic and Community Plans call for “each objective within the economic and community elements will be achieved through the implementation of specific, time-bound and measurable actions.”

In 2015 Donegal County Council LECP represented their priority goals as below. The graph below shows how these goals cascade, or map to actions.

Are Local Economic and Community Plans Working Towards to SDG 5.5?

LECPs aim to align and coordinate (join up) the various efforts, national, European and local, and the multiple committees, plans and strategies. With Ireland’s ambition, together with the reach & responsibilities of our 31 local authorities, how do LECPs address the current lack of “women’s full and effective participation and equal opportunities for leadership at all levels of decision-making in economic“?

Many LECP actions focus on new job creation via training and mentoring particularly for prospective entrepreneurs. For example Fingal’s plan to 2021 includes Action 20.

While not comprehensive, an informal review of these LECPs provides insight into local governmental efforts to work towards involving women as full and effective participants in of decisions concerning economics. Laois, reviewed in detail here, seems indicative of the approach taken by the 31 LECPs.

The LECP for Laois identifies a 3 high level goals with relevance for SDG 5.5. These are goals 3, 4 and 5. We will look at each of these goals in turn.

Associated with this goal are 3 objectives including objective B which states:

“Promote entrepreneurship across diverse groups”. Various actions are identified including actions 1 and 2 which mention women.

=> Objective A. To strengthen the capacity for community participation.

7. Enable meaningful representation by community representatives on local authority
committees through the Laois Public Participation Network and establish a strong structure to support this. (No measurement stated. How will stakeholder know when this is achieved?)
8. Encourage community participation in the formulation of Local Government policy, e.g.,
County Development Plan Review and Local Area Plan reviews. (Measurement: 10 public meetings held 2016 – 2018 as part of Development Plan and Local Area Plans review.)

High-level Goal G5 – Promote Equality and Inclusiveness Across All Sectors.

G5 has 2 objectives. Neither mention gender or women.

Indirectly, some goals, if appropriately scoped, might contribute to women’s “full and effective participation and equal opportunities for leadership in economic life”. For example Laois’ G2B5 may support all genders.

G3A, states ‘support start-up enterprises and the growth of small businesses‘ and the action to achieve this is a presentation to the SPC (G3A1). Important as it is to keep the SPC informed, a presentation does nothing to support women (or anyone else) in start-ups and small businesses. This action falls foul to the common problem of ‘activity’ over ‘outcome’. A focus on indicators aims to avoid this problem.

Each LECP considers the population served. In Laois’ largest towns, 5 – 9% of the population are Black or Asian, and 1-2% are Travellers. Additionally many Laois residents were born outside Ireland in countries that recently joined the EU or in non-EU countries.

Therefore an intersectional approach that consider not just gender but how gender interacts with other demographics would benefit at least 1 in 10 people, and perhaps as high as 29%, or 1 in 3 in Portlaoise.

In 2020, the National Women’s Council of Ireland, 2020 called on Ireland’s National politicians to:

Analysis – So are we moving towards “ensur[ing] women’s full and effective participation and equal opportunities for leadership at local decision-making in political and economic” life in Ireland?

Through the actions of the 31 local authorities, there is an opportunity to focus on women’s “full and effective participation”. Currently LECPs focus on inspiring new entrepreneurs, and by providing subsidized trainings through the LEOs. While female entrepreneurs likely benefit from other actions, such as 1-on-1 mentoring, the only focused action is the National Women’s Enterprise Day, an annual one-day event run by the LEOs.

Implementing the recommendations of National Women’s Council of Ireland would be welcome. Reviewing plans through the lens of SDGs, as done in Dublin City Council’s Corporate Plan, offers a model to reveal the degree of gender focus in LECPs. In 2020 such an approach would likely provide further evidence that women receive little support, and that local government is not acting on Ireland’s national ambitions to achieve SDG 5.5.