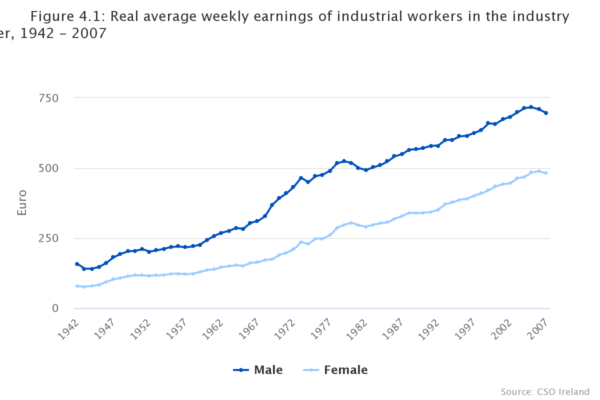 ‘Money. It is not the root of all evil. It makes the world go ‘round. It is a source of power. It is the freedom to pursue our dreams. And — no secret here — we women have less of it than men do. “

As noted above there are more women at lower pay grades. Most senior positions are held by men with more women working in lower paid roles. Something pulls up the average gender pay for men is the dominance of men in leadership positions.

Historical barriers to education were sited as contributing to Ireland’s gender pay gap. More than half of people aged 25-34 in Ireland are third level graduates. This is one of the few gender gaps where women seem to hold the upper hand. 59.9% of women and 52.5% of men are graduates.

As noted above, information and communication is one of the best paid sector. As we see below, studying STEM subjects continues to be dominated by men. This suggests two questions. 1). why is there such a difference in financial appreciation between sectors? and 2). how can we create gender inclusion within the various sectors so that there are, for example, more men in education and more women in engineering?

While higher education typically increases individual pay, it has failed to deliver economically for women graduates as a group.

Learn more about the Gender Pay Gap in Ireland ↓